By day, I’m a User Experience Designer at nclud. I continuously strive to understand the user from a psychological and technological point of view. To me, being a successful UX designer means creatively solving user needs to make people’s lives easier and better. There is no typical day here at nclud. My job is delightfully varied and interactive — on any given day, I am diving into the research on how to create the best results for a client and their users, conducting usability testing to ensure our concepts and design direction are fully understood by the user, or wireframing to create the sturdy backbone of a new application or website. Being a UX designer means that you’re involved in every stage of the game — thinking big picture while examining fine print details.

By night, I’m a standup comic. As these two passions developed, I began noticing similarities and started to reflect on their commonalities. They have a lot more in common than meets the eye.

Here are some lessons that both standup and UX have taught me:

1. Usability Testing is a Must

Each standup open mic is like a mini focus group. A five minute set is the chance to test how an audience perceives your jokes. Open mics give you immediate feedback and help indicate which portion of a joke should be kept, discarded or changed. Standup comedy is just one iteration after the next. It’s paying close attention to how a joke is received and then making those changes based on user feedback (aka usability testing). What makes sense to you might not always makes sense to the user, so to with comedy. Just because you think your jokes are hilarious (except for me, mine are always hilarious) doesn’t mean that others will always think the same.

Testing is key to building successful products. We recently collaborated with a local partner to create a new, multifaceted website that promotes tourism in the District (something they’re not currently doing). The organization has two main audiences: members and residents, and individuals looking to spend their time and money in the region. In the project Discovery Phase, we uncovered that many of their tax-paying members were actually unaware they were even a part of the organization. In addition, people often contacted the group to ask whether or not they were a member. We realized that we needed to: 1. clearly display a map to indicate the neighborhood radius prominently on the homepage and 2. develop a resource to properly alleviate this issue, featured clearly on the site.

No design or joke becomes an instant hit (although a girl can dream). A concept takes time to digest, iterate and prototype. For another nclud partner, we created an engaging member dashboard that was to serve multiple use cases: a platform for organization updates, an educational platform, a ticketing system, a file storage repository and a data visualization hub. We paid close attention to user goals and needs, but initially struggled with how to organize and prioritize content. After examining our consolidated in-depth interview data closely, we decided to take to a design studio process to help determine visual priority and hierarchy. In a traditional charrette, one idea undergoes a vetting process. Examples are rapidly sketched, options are offered, but only the best survive. This helped us create data-driven visuals quickly and effectively, while still giving hierarchy to high-priority information, including key organization analytics and educational resources. By following this rapid and iterative process, we achieved the best solution for our users and satisfied the client’s business objectives.

In standup, open mics are a grueling, but imperative part of the process. They are where comedians find their onstage personas, work out new material, become more confident onstage and learn how to interact with a crowd. Both joke and design concepts include details that can make or break the final product — think of the crucial placement of calls to action and the importance of a tag or reiteration of a punchline. At nclud, we make sure to involve developers, designers, and project managers in all major decisions and deliverables. We realize that our process is collaborative in nature, and no one should make decisions in a silo. This process creates great work that is the result of the collective.

3. The Devil’s in the Details

The basic format of a joke in standup typically goes as follows (with many, many exceptions of course; not all comedians are giving you the 1, 2 punch for their entire set, unless you’re actually getting punched by a comedian, then sorry and ouch):

The Setup — aka the premise of the joke; the necessary background info
The Punchline — aka the laugh, typically a surprising twist
Tags (optional) — aka additional punchlines, also known as toppers

So much time, consideration and effort goes into one joke. One idea has the potential to lead the audience in a variety of directions. Just think about all of the jokes that start off discussing travel. They all had the same premise, long lines, delays, etc, the same setup, but then Wham! Punchline. Tag. More tags. That’s one of the things I love most about comedy. You start out with a concept, an idea, but it’s your unique take on the issue that makes its special. Then the details of the tags can take the joke to new comedic heights.

Often times, the number of potential solutions to a UX problem can be overwhelming. But all work should stem from the user research conducted. Once you have outlined user preferences, needs and goals, you then have a roadmap to return to throughout the project. Details in wireframes are derived from knowing and understanding user types. At nclud, our Discovery Findings document highlights all initial research, including all client information, competitors, stakeholders, users and key performance indicators. We spend time carefully identifying and getting know to our users and user groups.

Once you’ve spoken to users, it’s then important to clarify their needs and consolidate feedback. I like to do this by putting opinion to paper and visually organizing feedback. This information then serves as our guide throughout the remainder of the project, guiding design and development. It’s easy to lose sight of initial project goals and considerations, especially when the scope is large and the project is long. We even like to leave user types up on a whiteboard throughout the entirety of a project. Tricks like this that can help you not lost sight of important details.

4. Don’t Be Afraid to “Kill Your Darling”

You can’t fall in love with your product in design or comedy. They say that “a great joke isn’t written, it’s re-written.” At first, comedians try to write a joke that gets their main point across to the audience. Testing out the premise on different audiences then helps comedians revise and test their initial thoughts.

In design, one user test can completely upend the seemingly brilliant solution you came up with. You have to be nimble and comfortable iterating until a process or design makes sense to the user. At nclud, we joke “design for mom.” If mom gets it, there’s a good chance the users will too. At times clients don’t know what they want until they see it. You have to be open to twists and turns throughout the course of a project. We are currently working with a health care partner on a fully scoped rebrand. After three rounds of revisions, our partner was still unable to come to a consensus. We took a step back to reconsider the decisions we had made up until that point. The organization is well-known in the industry and trusted by those it insures. Did we really want to create a potentially confusing user experience for those already familiar with the name? Ultimately, we decided that a variation on the current name would be best, alongside a reimagined logo inspired by the original design. Taking a step back and rethinking user needs helped us better clarify the organization’s new direction, strengthening the final design.

Both standup and UX require impeccable observational skills — frustrations and delights of the day to day, how processes can be improved, really anything that differs from the norm. There is brilliance in the daily grind, but also opportunity. Finding silliness in monotony or anomaly is a gift. So is solving for the user. Musings about seemingly routine topics (what comedian hasn’t told a joke about the monotony of travel) become hilarious jokes and not every design requires the wheel to be reinvented. Sometimes an email capture is just an email capture.

For example, during usability testing, typically an initial round of 5 will give you the broad scope of information you need to identify key user issues. Where did participants struggle when completing a user flow? Why? Do you have enough information to make changes based on feedback? Bottom line, never stop asking questions. Why is this joke funny? What point are you trying to make? How is that frustrating? What could make this better? Keen observation and curiosity is the secret to red carpet results — project or joke.

This concept also applies to the masters — of design and comedy. At the start of each day, I look to Dribbble, Behance and Medium for guidance, inspiration and ideas. This helps motivate me to look to what is already the standard, and either manipulate the concepts to fit my own work, or strive to improve upon the current solution. One great thing about the “masters” in design and comedy is how many examples of their work you can find. It’s important to take the time to watch the best comedy available and analyze it; break it apart to figure out what they’re doing and how they’re doing it. By studying great work, you eventually learn to apply the same principles to your own.

Rebecca Silverstein is a Senior Experience Designer at nclud. She isn't afraid to take risks and passionately offer solutions for a better world. She's into standup, music, and making fun of Alfonso. 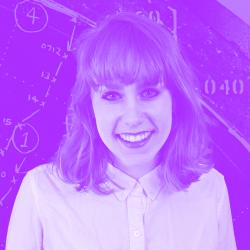